The Indonesia Bridge Competition (KJI) is the annual competition for college students in designing and developing a scaled-model bridge. This is the most prestigious civil engineering competition in the national level under the Kemenristekdikti (Ministry of Research, Technology, and Higher Education) program. The Ministry provides the fund and appoints a university / a higher educational institution to host the event. The constructed bridge model shall be made of steel and cold-formed steel. The Civil Engineering Department of State Polytechnic of Jakarta (PNJ) initiated and hosted the first KJI in 2005. This competition referred to the similar event in Texas in 2001 (it was the 9th competition). PNJ was then still entrusted to conduct the KJI II - VI for the following consecutive years 2006 - 2010. Thereafter, the following universities were appointed to host the event : University of Indonesia 2011 (KJI - VII), Sepuluh November Institute of Technology (ITS) 2012 (KJI - VIII), Brawijaya University 2013 (KJI - IX), Muhammadiyah Malang University 2014 (KJI - X), Maranatha Christian University 2015 (KJI - XI), State Polytechnic of Sriwijaya 2016 (KJI - XII), State Polytechnic of Malang 2017 (KJI - XIII), and State Polytechnic of Ujung Pandang 2018 (KJI - XIV). KJI has been the most complete competition since it has considered important aspects namely planning, design, implementation, and maintenance.

Upon Ministry's instruction, PNJ will carry out this challenging and prestigeous event (KJI - XV) from 07 up to 10 November 2019. A theme "Strong, Light, Beautiful, and Innovative Bridges" has been selected. Unlike the previous competitions, a bridge arch model (pedestrian bridge) will use the cold-formed steel as the main structural component.

The winning criteria shall be based on the evaluation of technical proposals, presentations and implementation of the construction of bridge models. The construction must comply with its design as set forth in the technical proposal. The participants are those officially assigned by university / higher educational institution in Indonesia. The competition is open to all university / higher educational institution in Indonesia with the civil engineering disciplines and other technical disciplines related to the bridge construction. 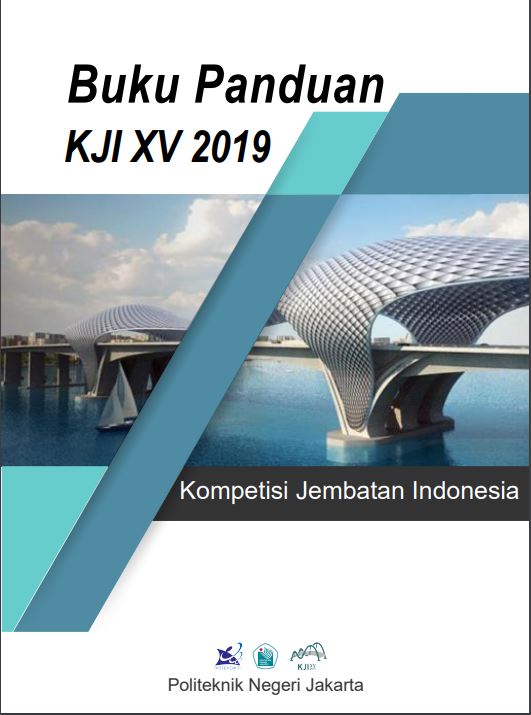 The journey of a thousand miles begins with one step. So, what are you waiting for, take your first step now.

The timeline has been wisely concluded to allow the interested teams with a sufficient time for designing and constructing the bridge model for the competition as follows :

Formation of Organizing Committee, Elaboration of reference book, and Selection of grand juries.

Printing of brochures, poster, and a guide-book

Deadline of Submission of proposal (soft copy and hard copy)

Distribution of proposals to all juries

Proposal evaluation and cross check of the results

Re-registration of the shortlisted teams

Rehearsal period for constructing the bridge model and its accessories

Confirmation of the selected teams

Setting of load test apparatus and final preparation of the committee

Have any question ? you can download the file to find the answer about KJI.

Be prepared for the competition and Good Luck.

"Good buildings come from good people, and all problems are solved by good design."