The Indonesia Building Competition (KBGI - I) began in 2009 and was conducted altogether with KJI - V. Like the KJI, KBGI is also the annual competition that challenges college students in designing and constructing a miniature model of multi storey building. The idea came out that a building should be able to withstand when the earthquake took place. In addition to that, the enviromental friendly of structural material such as cold-formed steel has been widely used to substitute ordinary woods. A force loading test should then be applied to the constructed building. The Ministry of Research, Technology, and Higher Education (Ministry) appointed the Civil Engineering Department of State Polytechnic of Jakarta (PNJ) to carry out the first (2009) and second KBGI (2010). Other universities hosted the event afterwards as follows : University of Indonesia 2011 (KBGI - III), Sepuluh November Institute of Technology (ITS) 2012 (KBGI - IV, ), Brawijaya University 2013 (KBGI - V), Muhammaddiyah Malang University 2014 (KBGI - VI), Maranatha Christian University 2015 (KBGI - VII), State Polytechnic of Sriwijaya 2016 (KBGI - VIII), State Polytechnic of Malang 2017 (KBGI - IX), and State Polytechnic of Ujung Pandang 2018 (KBGI - X).

PNJ, upon Ministry's instruction, will host this challenging and prestigeous event (KBGI - XI) from 07 up to 10 November 2019. A theme "Multi-storey, futuristic, earthquake resistant, and environmental friendly Building " has been selected.

In the previous 2018, KBGI - X was held at the State Polytechnic of Ujung Pandang in Makassar. It took place from 30 November up to 2 December, 2018. 10 (ten) teams from different universities passed the proposal evaluation and attended the competition. The model was a 2 (two) storey building. Since KBGI - IX 2017, a displacement-controlled loading test has been applied to the constructed 2 (two) storey building model in oppose to a force-controlled loading test.

In this KBGI - XI, the participants must design and construct a 2 (two) storey building model and a 12 (twelve) storey miniature building model. The latter will be placed on the shaking table to experience a simulation of ground motion because of earthquake.

The winning criteria shall be based on the evaluation of technical proposals, presentations and implementation of the construction of building models. The construction must comply with its design as set forth in the technical proposal. The participants are those officially assigned by Universities in Indonesia. The competition is open to all Universities in Indonesia with the civil engineering disciplines and other technical disciplines related to the building construction. 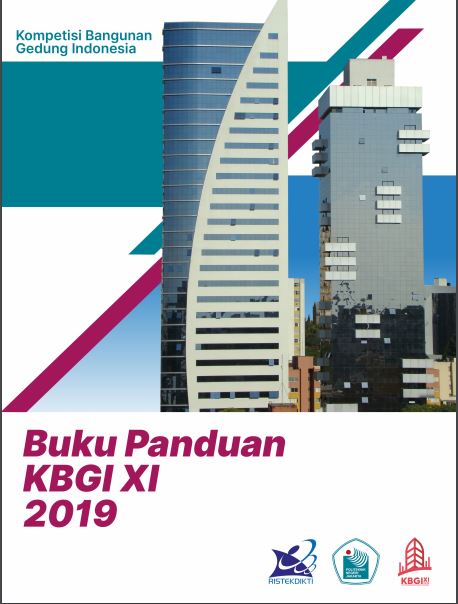 The journey of a thousand miles begins with one step. So, what are you waiting for, take your first step now.

The timeline has been wisely concluded to allow the interested teams with a sufficient time for designing and constructing the building model for the competition as follows :

Formation of Organizing Committee, Elaboration of a guide-book, and Selection of grand juries.

The deadline for accepting KBGI 2019 proposals is through the page http://kji-kbgi.pnj.ac.id

Distribution of proposals to all juries

Implementation of Competition 1 and 2, as well as testing the burden on KBGI 2019

There are forms that must be fulfilled by participants, namely :

Have any question ? you can download the file to find the answer about kbgi.

Be prepared for the competition and Good Luck.

"Good buildings come from good people, and all problems are solved by good design."